After a bit of a hiatus following his EP, Bail Or Mail, Skunkz makes his return with Where Is Skunkz?

This new album serves as a document to the 25 years of life Skunkz has walked this Earth. Sharing stories as an adolescence and thoughts during hardships, “either you fuck with me or not, but this shit ain’t fake,” echos as he opens the album on Great White. 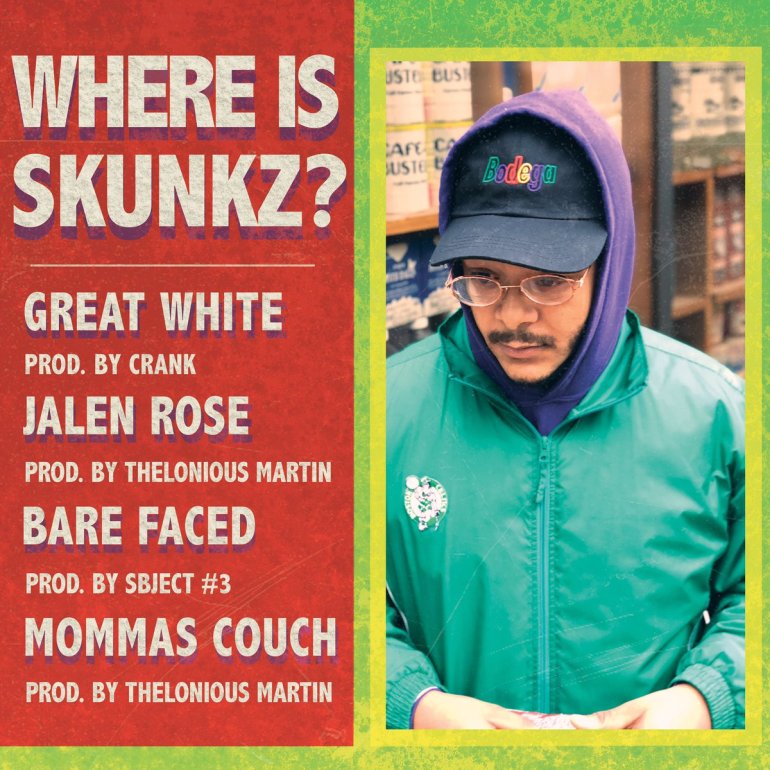 The hunger in Skunkz’ delivery (plus charisma) has always been a strong catalyst for his music, and compared to Bail Or Mail, the production, served by NoStableLabel mate Crank, Thelonious Martin and SBJECT #3, allow his vocals to hover as he floats from tale to tale. The production on Bail Or Mail felt more low to the ground. Grimey and menacing as he takes us through the streets as if he’s still right there, while Where Is Skunkz? is a reflection of those times. We call this progression.

“The weed made me want to face my problems when I wanted to leave.”

A song I’m constantly singing is that the energy hits on another frequency when the music is authentic, and that tune is no different here. See Mommas Couch as one example. The quote above is from a record off the album. Most people use their vices as ways to escape. In a world where a lot of cats sound the same, it’s little moments like this that give the music that individuality we so desperately need.

Give the music a listen, and show Skunkz some love. He’s been dropping a lot of snippets/info on his socials. Check his latest single Birdie produced by T. Wayne, a video for his single Ok My Friend produced by Crank and T. Wayne, plus catch him in the first trailer from an upcoming film we’ve been working on below.

The mission of this picture is to capture scenes of artists we are fans of in the underground circuit. The real underground. We believe it only exists now through Twitter and Instagram. We want to shed light on the negative connotation “Twitter rappers” have been given over the years. A lot of these artists are extremely talented moving in a much harder climate. This trailer in particular is from my last visit to Boston.